My onstage work has spanned over two decades in North Carolina. While my primary base has been Greensboro, NC, the bulk of my professional performance work--including work as a member of Actors' Equity Association--has occurred in the Triangle. My stage experience includes work with community theatres like Community Theatre of Greensboro, hybrid models and profit-sharing companies like bare theatre and Touring Theatre of North Carolina, along with more traditional regional theatres like Burning Coal Theatre Company, North Carolina Theatre and Triad Stage. 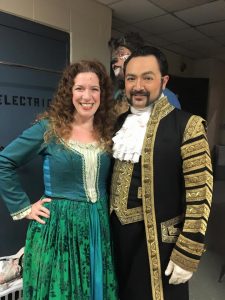 As the Steward in NCT's Into the Woods (Front left: Lisa Jolley; Back: Nate Hackman)

Offstage and behind-the-scenes, I have worked in direction; choreography; technical direction; lighting, scenic, costume and props design; and playwrighting. I served as a classroom educator and after-school program coordinator for Drama at Southwest High School in High Point, North Carolina. My responsibilities included programming, directing and technical direction along with teaching.

When I transitioned into freelance theatrical work, I worked predominantly in youth theatre, expanding into young adult and full community productions. My aesthetic focuses on clarity of action and big, clean choices which serves younger and more inexperienced performers well; my leadership focuses on supporting the ensemble as relationships coalesce and workflows, or "tracks", are developed for each member of the cast and crew.

Integrating the principles of peace and justice has been a two-fold process. Prior to attaining my Master's in Peace and Conflict Studies, I had a basic understanding of equitable principles and how they might be employed in several arenas: interpersonal working relationships; the messaging of and around productions; and some experience in Augusto Boal's Theatre of the Oppressed. Beyond that, my understanding lived in the world of predominantly commercial theatre.

As I grew in theatrical experience I began bridging my understanding of the concepts and theories in Peace and Conflict Studies with my sensibilities in theatre: I began to see how we might use theatrical process as a framework for transformative social practice. While it can be as simple as using Wikipedia--an open-access format for documenting communal knowledge--as a small part of research practices, it can be as complex as Boal's political work in South America which moved on multiple levels.

My work has grown into an ensemble-driven, community-informed reflexive praxis. In my most recent production of Once on This Island with Open Space Cafe Theatre in Greensboro, I challenged our cast to step into an empty space and make something happen. We were faced with several opportunities to invent our future: a challenging performance venue, limitations in budget and equipment, and a lot of passion, work ethic and drive. What resulted was one of the most impactful community productions on which I've collaborated, in one of the simplest settings.

A major component of my career has been graphic and digital design. Having worked in marketing, communications and public relations for several years, I have included original and commissioned works as well as pieces where I have served as art director.